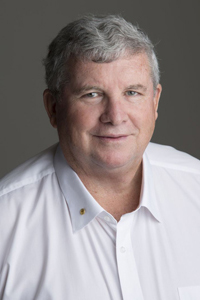 To say Shane Stone has been a busy man would be an understatement. He has twice served as Attorney General and held a number of portfolios including Education & The Arts, Employment & Training, Mines & Energy, Industries & Development as well as Asian Relations & Trade.

So where does a man like that draw his inspiration from? We asked him a few questions to find out

My inspiration came from both parents who worked tirelessly for the community. My mum Pam Stone OAM was one of the pioneers of post secondary education in the Border area (RCAE benefited greatly from her efforts) as well as being the first woman to be elected Mayor of Wodonga in 1985. People learn from example – I learned and was inspired by my parents.

I was teaching in Albury, later Wodonga and the Diploma of Teaching completed externally and part time was to upgrade my Trained Primary Teacher's Certificate from Victoria.

The greatest influence I had on my career choice was my late father Les Stone a primary school teacher who had taught in the Border area for many years including as Principal of Wodonga West Primary School. He later became Wodonga's first Mayor in 1973. Teaching of children is one of the most important callings or vocations that one can aspire to. I left the class room however in 1975 and became an administrator in a Melbourne based teachers' college. Having left the classroom I was not destined to return and ultimately went on to study law.

Nowadays I run my own companies across a diverse portfolio. Every day is different.

Growing up in a community where material wealth was secondary and the quality of your contribution counted for more than anything. In essence know a person by their deeds and not by their possessions. That was drummed into me by my father. This has been a guiding beacon for me in life and an aspiration I have worked to instil in my own children.