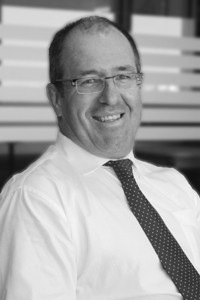 The son of a Cumnock grazier, Ross Reynolds began his rugby union career at The King’s School, and was soon named in the Mitchell College first XV after commencing his Bachelor of Business Administration at the Bathurst Campus in 1977.

Going on to play in the NSW Country Championship team in 1980, Ross played his first game for the Wallabies in 1982, following in the footsteps of grand uncle Lionel ‘Leo’ Reynolds, who represented Australia in two international rugby tests in the early 1900s.

Playing in 10 Tests and 25 Australian representative games, Ross had a successful career in coaching before moving into the commercial world, specialising in business development.

Ross shares his tips for winning in sport and in business.

I’m currently… working for HDR Rice Daubney as their Director of Business Development.

At school I... played every sport I could; rugby union, basketball, shooting, swimming, tennis, Australian rules and cricket. I also played rugby union and basketball for CSU.

I chose CSU because… it was strategically placed in between my family property in Cumnock and Sydney.

My worst experience at CSU... I cannot think of any negatives. I had a great time and enjoyed every day at CSU.

Today I’m motivated… by success and continually trying to improve my professional standing within the property and construction industry. I enjoy working hard as a team, in sport or in business, to achieve success, make sacrifices, and find ways to out-think our opposition.

The biggest influence in my life... my stable, hard working and loving environment provided by my parents.

I’m most proud of… playing and coaching for my country.

In the future I’d like to… continue winning commercial projects for HDR Rice Daubney to provide the architectural design for our clients and win the 2015 Sydney Premiership with Manly, who I am now helping to coach.

The best piece of advice I ever received... be persistent; don’t ever give up in sport or business and you will find a way to be successful.

The thing I wish I had done but never got around to... parachute out of a plane but my wife won’t let me!

One last thing... take every opportunity that comes your way; smile, laugh, enjoy life with family and friends. This is not a dress rehearsal.