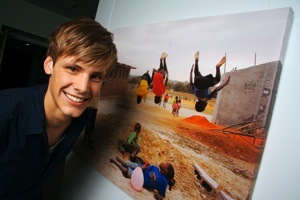 Not many people get their artwork hung in Parliament House Canberra. For David Ford it's a reality.

"I am really excited to have my work displayed at Parliament House. I use artwork and media to voice my concern and support for the communities around the world who live in poverty. I want to encourage our Australian government to do more to address extreme poverty, and to increase our aid budget to 0.7% of Gross National Income."

0.7% GNI is the internationally agreed target to halve world poverty by 2015. Australia currently gives 0.5% which lags behind other rich countries.

The exhibition was initiated by Micah Challenge and Make Poverty History Australia, in support of achieving the Millennium Development Goals to halve world poverty by 2015.

David currently lives in Bondi and works as a television presenter for the new music show Scout. Born in Canberra, he studied filmmaking at CSU's Wagga Wagga campus. In 2005 he transferred on an international exchange scholarship to a film school in Canada. It was the start of several world trips, photographing and filming documentaries from the grandeur of Europe to the slums of Brazil and Mozambique.

"Experiencing poverty first hand in Brazil and Africa certainly changed my perspective on the world and has influenced my photographs and films. Aid and development becomes more than a nice ideal. Targets like 0.7% suddenly have a human face and an urgency that is hard to ignore."

More information on David Ford as well as Make Poverty History and Micah Challenge can be found via the links below.